Well, the time had come. I was bringing my oldest to his 1st ever skate board competition. It was a convoy sponsored event at the famous Arlington Skatepark. It was a beautiful sunny day and a crisp 55 degrees. Bradley was overwhelmed with the amount of activity happening all around. He just wanted to give prizes away. He was also worried about hos clothes. His jeans had a rip in the knees. I told him all skateboard kids have jeans with rips. After seeing everyone at the event, he saw he had nothing to worry about. 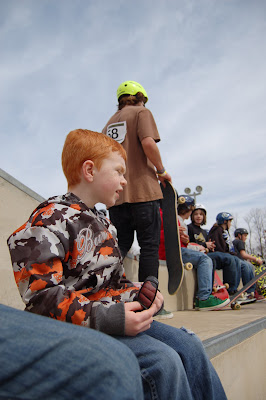 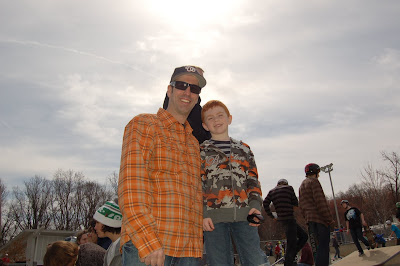 After finding a seat and watching kids huck themselves off everything and anything, a skater broke his board in front of us. He then began to spout the usual profanities, so everyone would look at him. It's a common occurrence, and one I have seen multiple times. But it was Bradley's first look at the temper tantrums that occur. He just looked at me and with wonder said, "What's he going to do now?" He had a general concern for over-acting skater. He wasn't fazed by the profanities like I thought he would be. I told him that he would either go buy another board (Yeah right), or borrow someone else's and do the same thing. 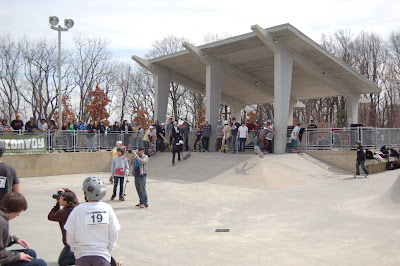 When the comp began, I told him he could help me judge, but he didn't want to do it. He was afraid of messing up and giving the wrong kid the prize. I told him there is no perfect way to judge a comp, and just tell me who he thought did the best. So he watched the craziness and felt sorry for the kids that fell. 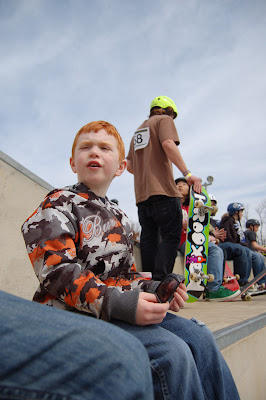 Watching a skate comp through a kids eyes is pretty cool. I ask all of you, if you have the chance, to do it. Some people forget about the fun and the craziness and take it all for granted. Don't worry about the bad words and the smoking and all the other stuff, kids don't even pay attention to that. They just want to make sure everyone is OK.
Posted by alpine bunch at 11:07 AM