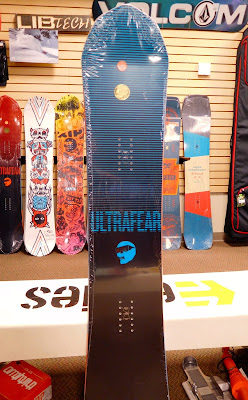 New Capita decks have arrived at both Alpine locations. The NEW ultrafear is an all mountain shredder with zero camber under foot and reverse camber in the tip and tail.
As a three-time Transworld Good Wood Award winner and star of endless video segments, no board is more dependable than CAPiTA’s team favorite, the ULTRAFEAR. You know what they say, if you want to stay in the winner’s circle, you gotta spend some time in the gym and that’s exactly what Capita did to beef up this already proven series. New for 2015, they added a P2 Superlight Core with Kevlar/Titanal Body Armor in the shoulder areas – allowing your ULTRAFEAR to handle all the abuse you can throw at it. Also new for 2015 is a 1.5mm CORK dampening system, and an offset edge seam making this one of the toughest jib and park boards in the world.
Posted by alpine bunch at 6:58 AM